For some growers, the Produce Safety Alliance (PSA) Grower Training is their first introduction to the resources that are available to fruit and vegetable growers through Extension. The Food Safety Modernization Act, passed by congress and signed into law by President Obama in 2011, requires produce growers to attend an approved food safety course and the PSA Grower Training is the first approved course. Jim Shephard attended a training offered by the University of Missouri Extension.

Jim Shepard is the owner and operator of Simple Man Farms in the Missouri Bootheel. Shepard was brought up in a family of gardeners. After the aluminum plant that he previously worked at for 32 years shut down, Shepard decided to make a business out of his passion for gardening. He has always had a garden that has continued to grow in size over the years, but he did not commit to becoming a full-time farmer until a couple years ago. 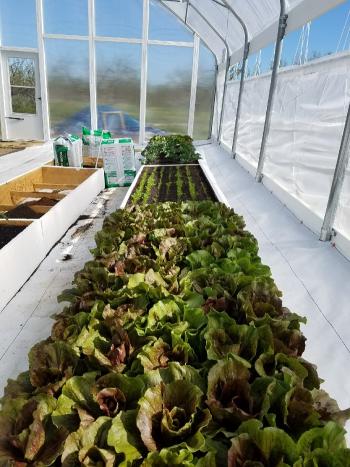 Shepard incorporates outdoor production, greenhouses, and a high tunnel at his farm. He grows hydroponic tomatoes, hydroponic lettuce, and a variety of fruit trees, berries, many different vegetables, almonds, ginger, and turmeric which he sells at farmers markets in his area.

With Shepard’s farm being on a hill, he incorporates terrace farming on his land. This was something that the trainings support and he found it to be an effective way of utilizing his while controlling erosion. Shepard also has worked to make a nice habitat for the bees he has on his farm. Through this program Shepard has “…incorporated not only clover but also other types of plants for the bees…” in his terraces. By doing this he was able to get use out of land that would have otherwise been lost.

At the training, Shepard learned about several services available to farmers which he did not know about previously, such as water, soil, and plant tissue testing available through Extension. As a result, he conducted a tissue analysis with plants from his high tunnel. The results showed the plants were low in nitrogen and magnesium. Therefore, he adjusted the liquid fertilizer that he uses in his hydroponic system.

Another change that Shepard has made to his farm has to do with how he discards the water from the washing machine in his house. Previously, the water ran out on the ground and created a muddy spot near his fields. After attending the trainings, Shepard realized that the discarded water from his washing machine should be re-routed. While this water doesn’t likely cause a food safety concern, he realized that the mud detracts from the appearance of the farm and makes it harder to maintain cleanliness. He said, “I am now installing culverts so the water runs under the field to the ditch.”

With help from the PSA Grower Training Shepard has been able to improve his business by incorporating food safety practices on his farm. As a bonus, he is more aware of the resources available to him. As he says, “[The instructors] were helping you do what you do better.”