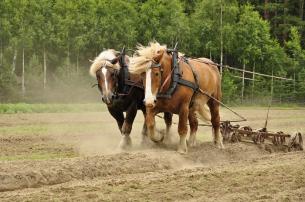 LaVern Zeiset, who grows 25 acres of vegetables and has dairy cows, was already well-versed in the Food Safety Modernization Act (FSMA) when Shawn Bartholomew first contacted him. Barthelomew is Safe Wisconsin Produce program manager for the Division of Food and Recreational Safety at the Wisconsin Department of Agriculture, Trade, and Consumer Protection (DATCP).

Zeiset, a Mennonite farmer near Withee, Wisconsin, can’t recall the exact year when he first became involved with FSMA. But he knows it was during the initial comment period regarding the new regulation affecting produce growers, processors and handlers. It may have been in 2011 when the act was passed by Congress and signed into law by President Obama.

Two Plain community growers, Mr. Yoder and Mr. Schrock, contacted Zeiset after attending a meeting in Ohio with the US Food and Drug Administration (FDA). During the meeting, they commented that if the regulations moved forward as presented, Plain community growers would find it very difficult to comply.  Some of them might even go out of business. It appeared to them that some regulators working for the FDA were unaware that some small growers use horses to work in their fields, which can increase the risk of contamination.

In response, Michael Taylor of the FDA asked the two men to form a committee of Plain community growers. This committee could guide the FDA to ensure that any new regulations could be implemented on their farms. Yoder and Schrock formed the Food Safety Education Team and invited Zeiset to join, representing Plain community growers in Wisconsin. Zeiset said he agreed to join out of a sense of Christian duty to serve fellow growers.

Ever since, Zeiset has attended yearly meetings in Ohio to remain updated on FSMA. He said, “We were already aware and educated three to five years [before the public release of the rules in 2015]. Food safety is not new to me by any means.”

So when Bartholomew contacted Plain produce growers at the Central Wisconsin Produce Auction in Cashton, they immediately directed him to Zeiset. Bartholomew and Zeiset began their working relationship with a long conversation sitting on the tailgate of a truck. During this conversation, Zeiset explained how he serves fellow Mennonite and Amish growers by educating them about FSMA and how important it is that the education come from a fellow grower who can explain the rule in a practical way.

“If we look at the rule only, it looks overwhelming to a small grower in a Plain community,” he said. “So I, as an educator, feel we need to understand it and translate into our culture’s language to where they understand, and it makes sense.”

Bartholomew later invited Zeiset to attend a Produce Safety Alliance (PSA) train-the-trainer event with him in Minnesota. Both men can now teach the FSMA and on-farm food safety classes that all fruit and vegetable growers are required take to comply with FSMA. Since becoming a PSA Grower Training trainer, Zeiset has co-taught three classes offered in Wisconsin to Plain communities, with a total of 109 participants.

When Zeiset teaches a PSA Grower Training class, he relates the content back to his own farm and uses stories to help others understand how to implement better food safety practices on their own farms. He tries to help farmers develop a food safety mentality. “We are trying to reduce risk of contamination, so if you think of it and realize you possibly contaminated something, it’s a good sign.” He tries to explain to farmers that they will likely make mistakes. He encourages them to use those mistakes as an opportunity to think through how they can prevent them from happening again.

He also encourages growers by explaining that he and other farmers have found that implementing better food safety practices benefits their operation. “I hear so many times people are starting to exercise these practices and realize life is easier by having crates washed and stacked orderly and the wagon cleaned[…] We need to get the packing facility so boxes are off of the floor, so we build something higher and it’s more efficient and faster.”

Later Bartholomew presented Zeiset with the idea of forming a Produce Safety Advisory Council for Wisconsin. “I said it would be a smart idea, because we need farmers to advise you folks,” says Zeiset. Although Zeiset hesitated to join the council because it is difficult to travel to distant meetings with a horse and buggy, he did join and was chosen to be the vice chair. He values the Produce Safety Advisory Council because it allows growers to educate regulators about the realities of farming.

Zeiset continually stresses that he has taken on responsibilities to educate fellow growers and represent them as part of Christian duty and to help preserve their way of life. “I feel blessed I’m given the talents from God to speak and interpret and grasp and educate,” he said.