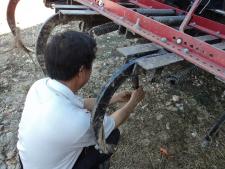 Issue:   Nhia Xiong is a diversified farmer located in Anderson, Missouri.   Mr. Xiong is a first-generation Hmong refugee who moved to Southwest Missouri with the goal of making a living by producing and selling vegetables at the local farmers’ markets.  When he contacted Lincoln University Cooperative Extension (LUCE), he was growing vegetables on a 0.25-acre plot and selling at one farmers’ market, one day per week.  Mr. Xiong had asked for LUCE’s assistance to help him expand his operation, sell vegetables on a year-round basis, and make a profit.

What has been done:  Lincoln University’s Innovative Small Farmers’ Outreach Program (ISFOP) employs a holistic approach and sustainable agriculture methodologies in assisting small farmers.  ISFOP staff has been working with Mr. Xiong and his family since 2010 through one-on-one farm visits and consultations.  They also invited the family to participate in educational farm tours and workshops offered specifically for Hmong producers in the Southwest Region in Missouri.  The areas of focus for Mr. Xiong included, among other things, season extension structures and techniques, drip irrigation, weed control using plastic mulch, on-farm food safety, and marketing.  ISFOP staff introduced Mr. Xiong to the USDA Service Center and the various programs available to benefit the small farmers just like him.

Impact:  As a direct result of these educational outreach efforts, Mr. Xiong was able to expand his area of production by installing drip irrigation system and by utilizing plastic mulch for weed suppression.  LUCE staff had accompanied Mr. Xiong for his initial USDA Service Center visits.  He received partial funding for two wells from Natural Resources Conservation Service (NRCS) for use in his livestock and vegetable production.  He also had signed up for the Environmental Quality Incentives Program (EQIP) High Tunnel initiative.  Once approved for the high tunnel, ISFOP helped Mr. Xiong build his first high tunnel and assisted with planting schedules that allowed him to harvest produce on a year-round basis.  This innovative farmer, based on the information gathered at a LUCE-offered workshop, designed and built a cold storage room for his harvested vegetables.  This cold room helped to prolong the shelf-life and the freshness of his harvested produce.  At the time of this reporting (2020), Mr. Xiong has almost four acres of land in vegetable cultivation, and a total of four 30’ X 60’ high tunnels.  He follows most, if not all, Good Agricultural Practices (GAP) and food safety protocols during the production and marketing of the vegetables grown on the Xiong farm.  Presently, he is a regular vendor at the Webb City, Bella Vista and Kansas City farmers’ markets.  Despite the pandemic, in 2020, Mr. Xiong was able to gross over $25,000 from the sale of vegetables produced on his farm.