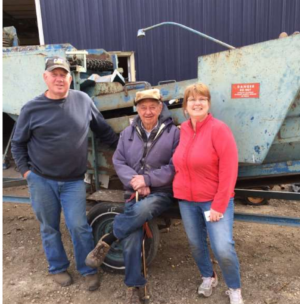 Farmers are learning that the new Food Safety Modernization Act (FSMA) Produce Safety Rule is not a burden, as they expected. Mike Buske has been growing vegetables commercially for nearly 20 years. While he admits that the idea of the government regulations could take the fun out of farming, so far FSMA has not been a burden. “As long as they keep the rules reasonable, it shouldn’t cost much more than what we’re doing,” he said.

Similarly, Charlie Puffer, who began growing vegetables commercially three years ago after retiring from the Air Force, said, “As of yet, I don’t see it as a burdensome regulation.” Buske hosted a field day, co-sponsored by the Iowa Farmers Union and Iowa State University Extension and Outreach, at his father, Richard Buske’s, farm north of Fort Dodge. The field day shared information about FSMA, high tunnel production, and vegetable packing, and Puffer attended.

Buske and Puffer also recently participated in the Produce Safety Alliance Grower training, offered by ISU Extension and Outreach. FSMA requires farmers to take a food safety course, and this meets the requirement. Based on what they learned, both farmers have identified changes they can quickly make on their farms to improve food safety.

Buske, who grows many vegetables including potatoes, tomatoes, melons, and raspberries, realized the importance of using clean harvest containers. Because he washes vegetables after harvest, he previously thought it was okay to use harvest containers that were soiled. However, he learned that is a quick way to spread contamination.

Puffer has you-pick strawberry fields, raspberries, and blueberries, as well as vegetables and livestock on his farm north of Iowa Falls. He learned that allowing customers who have not washed their hands to pick berries could spread food-borne illness. “If a mom comes with a toddler and she changes a diaper in the car and then goes out to the field to you-pick, there is potential to pass an illness on,” Puffer said. Therefore, he and his wife Lonya are going to make a wash station and require all customers to wash their hands prior to picking.

The Puffers also raise pastured poultry and pork. Raising livestock and produce on the same farm is synergistic, because the manure is an excellent and sustainable fertilizer. But it also poses a food safety challenge, because manure may contain E. coli or salmonella, which are common pathogens. Because of recent FSMA education, the Puffers are thinking through how they can reduce this potential risk. First, starting this year they will ask customers who want to visit the animals to do so after picking, rather than before, to reduce the risk of spreading contamination from the livestock area to the fruit and vegetable fields. Second, Puffer realized he needs to do the same. “I hadn’t thought of it; the first thing I do in the morning is chores. I’m in a chicken pen and could transfer salmonella to the strawberries.” Puffer will now wash his hands after completing chicken chores and change to another pair of boots before going to the fields.

Finally, the Puffers are now intentional about when they apply manure to ensure they apply raw manure at least 120 days prior to harvest. “In areas with short duration crops, like lettuce, radishes and beets, we apply the manure in the fall,” he said.

Adjusting to FSMA may actually be a bit easier for the Puffers, who are beginning farmers, than for Buske. Buske already has a walk-in cooler and a packing area, which he said is a bit “primitive.” So he may need to make some changes to his existing infrastructure to improve food safety. The Puffers, on the other hand, are building an on-farm store now, with an area for washing and packing produce and a space to install a walk-in cooler in the future. Therefore, they have the opportunity to design their facility with food safety in mind. As a result, they are choosing washable surfaces for their countertops, walls, and floors. Although their washing and packing area will have a gravel floor until they are able to pour concrete, likely in fall 2018, it will have a drain system so it never has standing water. They have also decided to purchase a prefabricated walk-in cooler once they are ready, rather than building their own, because they want a cooler with washable surfaces.

Like Buske, Puffer was not excited for more government regulations, but he admits it is nice to be better aware of food safety. After all, he said: “The fastest way to go out of business is to make a bunch of people sick.”